Skip to content
Home » News » Paramount Movies Premiers The Trailer For ASSAULT ON VA-33! Produced By And Featuring Gerald as Gen. Welch!
Previous Next

Paramount Movies Premiers The Trailer For ASSAULT ON VA-33! Produced By And Featuring Gerald as Gen. Welch! 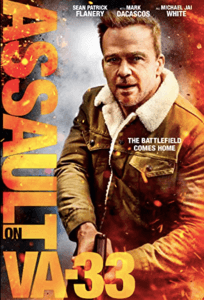 Army veteran, Jason Hill (Flanery), heads down to his local VA hospital for a routine PTSD appointment when terrorists invade the facility to kidnap head of theJoint Chiefs of Staff, Gen. Welch (Webb). Of course, Hill’s wife (Holden) works there and becomes one of the hostages. The cast includes action movie favorites Michael Jai White (“Accident Man”) as police Chief  who realizes that Sean is our only hope and Mark Dacascos (The Chairman from “The Iron Chef,” “John Wick 3”) as a bad guy with martial arts skills. Nick Cage’s son Weston Cage Coppola shows up as the lead terrorist.

Get a preview of all of the action here: