The series was just released on social media giant SnapChat and Loud Labs. The scripted drama features Stella Hudgens, Dallas Liu, Brighton Sharbino, Micah Tarver and Gerald as Coach B. It tells the (fictional) story of Nash Brooks, son of National Basketball Association player Oscar Brooks, as he relocates from Indiana to Los Angeles after his dad is traded and struggles with the transition.  CHECK IT OUT on the SnapChat APP now!!! 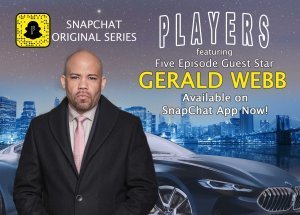