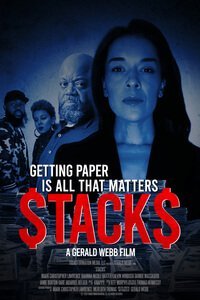 On the eve of the Covid-19 worldwide quarantine, Daytime Emmy nominated producer, Gerald Webb, made his directorial debut in 2020 with the edgy short film $TACK$.

Synopsis: Unprecedented times force two fierce rivals to come face to face for the first time in over a decade, to close a deal for the most valuable substance on earth.

Director statement: $TACK$, at its core, is a film that holds a mirror up to every viewer and every member of our society offering them the opportunity to see the best and the worst in themselves. Upon first view almost everyone misses the stinging social commentary and myriad of clues teasing the audience as to what’s truly unfolding on screen. Purposefully daring them to confront the judgments and assumptions in their own minds. What judgements will you make and how will they affect your views of Magdalena, Hector, Ty, Rube, Momo and Jordan? In the end what do those judgements reflect within you?

“The high production values and quality of actor on-screen just add to the overall feeling. It is a clever and confident debut that pays off superbly due to the meticulous lead-in.“

For more on $TACK$ visit-

STACKS ($TACK$) is a nail biting dramatic program dripping with social commentary on our post Covid-19 world.Directed, Written and Produced by Daytime Emmy A…

About the filmmaker: Gerald Webb directed, wrote and $TACK$. While the film marks Webb’s directorial debut, the Daytime Emmy Award nominated producer, actor and former casting executive is no stranger to filmmaking. He has produced 35+ films, cast 100+ films and has portrayed roles in over 150 films and television shows including: BARRY, LA’S FINEST, BULL, CRIMINAL MINDS: BEYOND BORDERS, IT’S ALWAYS SUNNY IN PHILADELPHIA, AGENT CARTER, 9-1-1 and many more.

Prior to co-founding Deinstitutionalized, Gerald through his other company, Transformation Films, cast 100+ feature films including Syfy network’s mega-hits SHARKNADO 1-3 and the first season of Syfy’s series Z-NATION. Gerald worked his way up to the executive position of Director of Talent for The Asylum studios, producers of Sharknado and Z-NATION. He immediately went to work to transform the diversity of the studios’ films. Under Gerald’s guidance, star name casting for The Asylum’s films grew by 380% and diversity in casting across all categories more than doubled.

In 2019, Gerald Webb was nominated for a Daytime Emmy Award as a producer on Amazon’s THE BAY. He’s also garnered 7 Telly Awards in 2018 for Circus Kane and two in 2019 for 2nd Chance For Christmas. Gerald is a member of the National Academy of Television Arts & Sciences, The Screen Actors Guild (SAG/AFTRA) and the National Association of Television Program Executives (NATPE).

Currently Gerald can be seen guest starring on LA’s Finest, 9-1-1, in Deinstitutionalized’s upcoming action film ASSAULT ON VA-33 and in the hilarious music video for DROPPING DEUCES from the $TACK$ soundtrack.

DROPPING DEUCES was written and performed by Gerald Webb and produced by Knappy.

PHILADELPHIA (CBS) – Movie studios continue to draw up plans when it comes to the release of summer blockbusters during the pandemic. Smaller filmmakers are dealing with the same issues as well. CBS’3 Ukee Washington introduces us to a local filmmaker who’s based in Los Angeles and how he actually completed a project during the pandemic.

TACK$ is a film that is very much of its time. With the world still dealing with the global pandemic, the short movie takes a look at a very particular problem associated with everything that is going on.

Greetings again from the darkness. The set-up is a familiar one. Two tough guys, armed with weapons, snap at each other about the meeting that is about to go down. Tensions are high. Taking place in an underground garage for privacy, and as the SUV approaches, the two men bow up – looking ready for action.

Sometimes, you have to laugh. That may seem like odd advice to give at this moment in history because, right now, there’s a lot of people who are convinced that we’ll never share a joke or a smile again. They look at the news about the spread of COVID-19 and the empty grocery store shelves…

Sometimes, you have to laugh. That may seem like odd advice to give at this moment in history because, right now, there’s a lot of people who are convinced that we’ll never share a joke or a smile again. They look at the news about the spread of COVID-19 and the empty grocery store shelves…

Transformation Media, LLC is pleased to announce the lead cast and virtual premiere for the nail biting $TACK$, a drama is dripping with social commentary on our post Coronavirus world. $TACK$ and Dropping Deuces, a Covid-19 themed parody song and music video soundtrack are available NOW.